We are NOT resorting to that! Seth MacFarlane had considered a response to South Park for this, in addition to several other jibes that the show was created by a group of manatees, but decided against it since it he decided that Family Guy didn't have the time to waste on South Park after a joke was written but not used due to being considered in poor taste.

When Seth gave a commencement speech at Harvard in , he, in character as Stewie, made reference to the South Park parodies, confirming that the cutaway gags are not in the show to advance the plot, but just for the purpose of hilarity.

He noted it was an attempt to one-up Family Guy and referred to the pin gag as 'lame. In " Bigfat ", Peter says that he's always wanted to go to Canada, but since South Park already has, he couldn't go.

Donald was infuriated by SNL and publicly announced that it should be canceled. In "Oh, Jeez", Gerald Broflovski is tasked with posing as an ambassador and demonstrates his ability to vary his voice slightly while claiming to be three different characters from Family Guy in a shot at similar sounding voices by both Seth MacFarlane and Seth Green.

Now not all Family Guy's jokes are funny, a lot of their cutaways are unfunny. But you gotta give them credit for all the good ones the show has had, which is a lot.

It's easy to tell that the writers spend a lot of time on not the plot itself, but just writing funny jokes on the side.

Most South Park seasons, especially modern seasons will have its fair share of good episodes that everyone loves, and filler episodes people only wanna watch once.

While Family Guy definitely has some episodes that are better than others, it's pretty amazing how especially when the show was at its prime nearly every single episode was flawless.

You can turn the tv on and enjoy any Family Guy episode that's on really, and you also don't even have to start from the beginning because the show is more humor driven than plot driven and you can understand what's going on.

Not like South Park, since it's plot driven it's better to start the episode from the beginning. Which brings me to my next point I feel Family Guy is just a more positive charming show to watch.

South Park makes you feel like you're having a philosophy lesson, which is great too, but sometimes you just wanna turn on the tv and relax and watch some good laughs.

Also if you're someone who dislikes how South Park has become more satirical in recent episodes and has less focus on just the characters and general outline of the show then you might wanna give Family Guy a try.

While Family Guy does have its moments and episodes where they try to teach you something too, it's more character driven. Which is nice to see because if you've gotten attached to the characters it's nice seeing their personalities shine through and what they're gonna do next.

Speaking of characters Both shows have hilarious characters, but the main characters on South Park just seem so bland and one dimensional sometimes.

But on Family Guy each character has their own quirks to describe them. The only character I have a problem with in that sense is Chris because he's too similar to Peter but at least he doesn't have much involvement in the show.

Even Meg the character nobody likes has a lot of development, like in the episode "Seahorse Seashell Party" when she stood up to everyone.

Eric Cartman is definitely a fantastic character, but there's not enough depth to him. I get the joke is that he's just a pure evil child with no remorse for anything but it'd be nice if the show dug deeper into why he's like that.

I mean it's been 20 seasons now, we need answers. They've implied that it's because he has no father but they only let us see him crying because his dad was a ginger.

They sort of tried to develop Cartman in Season 20 when he started becoming politically aware and respectful to women, but why? Wheras Stewie, he started out really evil but slowly developed overtime and became nicer and nicer.

They also have explained why he hates his parents so much, and how he actually looks up to Brian as a father. There was an entire episode where Stewie went back in time to make him never born because he hates how stupid everyone in his family is.

South Park has had its emotional episodes such as "Kenny Dies" but I don't think they've had nearly as much as Family Guy. I feel like it's harder to find that in South Park, moments where the characters actually connect and have emotional moments with each other.

Enough said. They are such an iconic duo. There are countless times where Stewie has gone so far to do things to cheer Brian up.

Like murdering another dog to fake Brian's death to show him how much people care about him.

If that isn't friendship then I don't know what is. Another good thing about Family Guy is it appeals to all audiences in a way.

It has it's silly moments for kids to laugh, I started watching Family Guy when I was young and I would laugh so hard at the more simple jokes.

It's definitely an enjoyable show to watch with others. Since South Park can be edgier and harder to understand for younger people it doesn't appeal to all audiences as well.

This is partially why Family Guy has had all its success and it gets more views than South Park, but that's also mainly because it's a network television show and South Park is cable.

But I feel the simplicity and appeal to all age groups plays a huge factor too. A lot of people criticize Family Guy for being too stupid, but it actually does have its smart moments.

I still think South Park does it better but I don't think it's fair to say that Family Guy never has good writing because it does at certain times.

Peter is like Richard, they're both characters that will mostly say dumb things, but then say things that are smart.

But South Park has better character development. There is no episode of Family guy not even a season episode that can match Kenny dies it Raisins in character growth and emotions.

I really don't know how much of Family Guy you've even seen but I've seen every episode of both Family Guy and South Park a million times.

And I'm telling you Family Guy has had really good moments in character development, maybe not so much anymore especially seasons which are just awful imo, but it has.

Sometimes you just gotta sit through the stupidly funny parts to get to the meaningful parts which takes patience for people who don't like Family Guy.

I've seen every episode so many times. I own the first 13 seasons and marathon through them at least once every 2 months.

The show has had meaningful moments but they don't measure up to South Park simply because of what the 2 shows are meant to be.

Family guy is meant to be a comedy. South Park might be funny but it's more of a social commentary, which makes it feel more realistic and poignant so the emotional episodes are just more impactful because when they come up they take themselves completeley seriously while still being South Park. 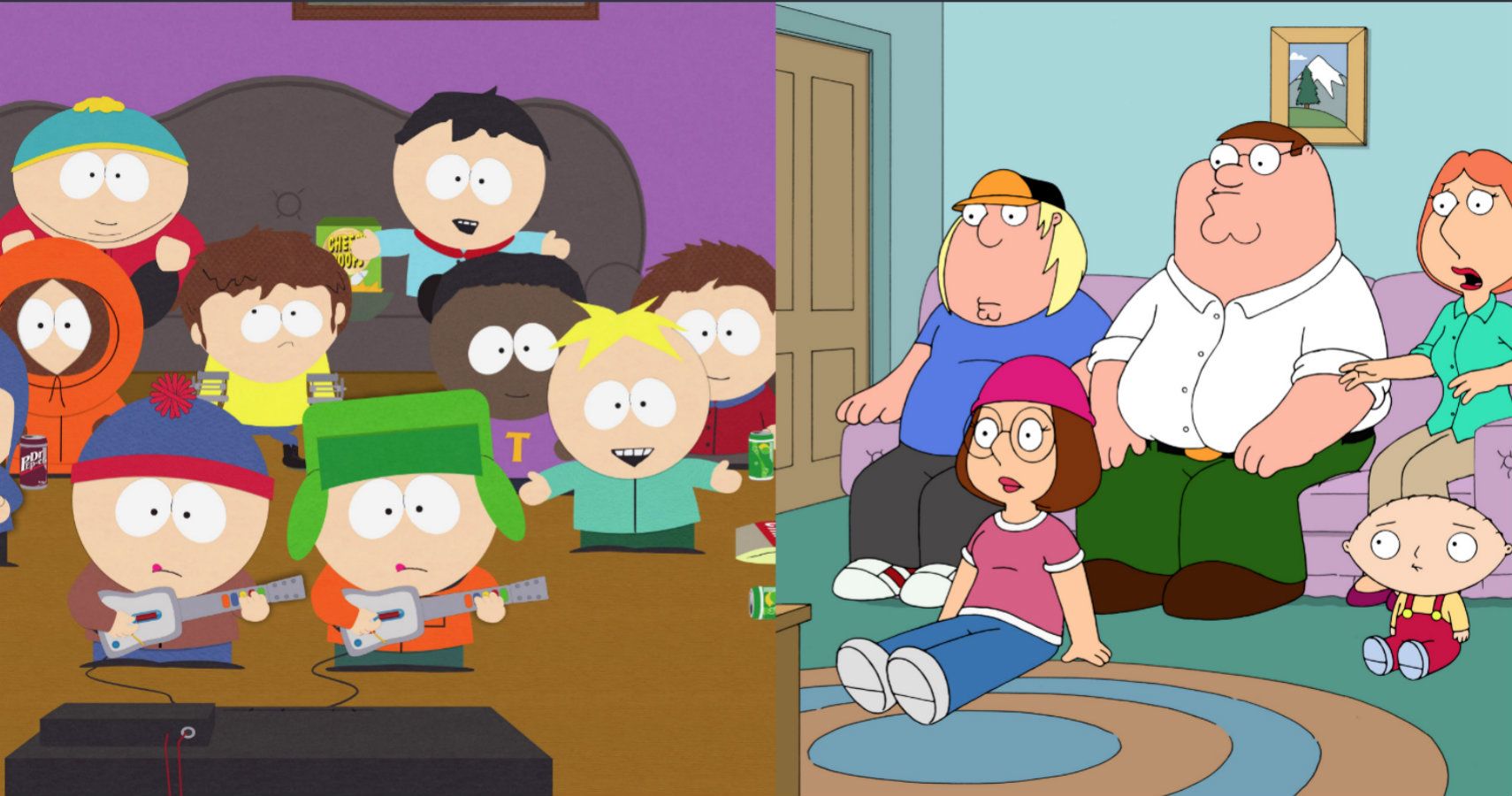